Another shirt dress. Testing the Mayberry.

In my seriously sporadic blog posting I'm back, to bring you another shirtdress!  Shirtdresses have been EVERYWHERE in the sewing world this summer. I guess it's partly been fuelled by #Sewtogetherforsummer but anyway it's a craze I am happy to jump on bandwagon with. So when Jen of Jennifer Lauren handmade put out a call for testers for a shirtdress, I speedily signed up! 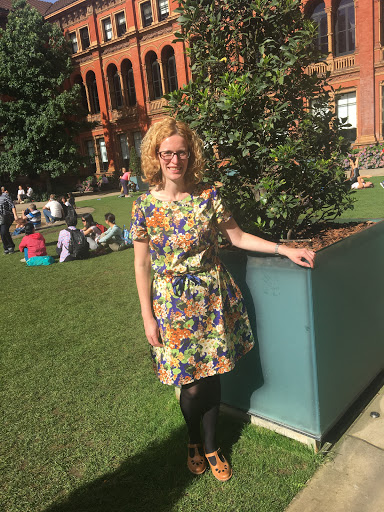 The pattern calls for a floaty fabric, however I had this awesome, not so floaty stretch cotton, which came from fabric godmother which I wanted to use so I went with that. I reckon that if, like me, you've got a cotton in your stash that you think this dress would look awesome in, I'd say go for it.  It actually helps the feature, off-centred front to stand out I think.  However, the bodice will stand out slightly from your body, I guess that's your own judgement call. 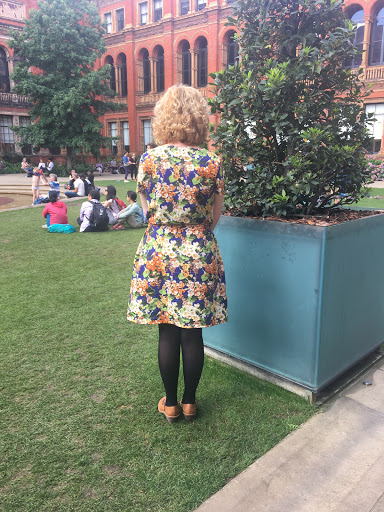 This was my first experience of testing for Jen and I was really impressed by the standard of the pattern and instructions at this stage. I think most people had a similar experience with the tester version so there haven't been many changes made from the tester version.  This is one of Jen's first patterns with multiple cup sizes and I found this to work really well.  I cut a size 12 and C cup for the bodice and graded between a 12 and 14 for the skirt.  For this version I also added 4cm to the bodice, this is fairly standard for me as I have a long torso but I didn't take any length out of the skirt to compensate and the dress falls to above my knees.  I'm 172cm/5'7" so this is just something to be aware of if you're fairly tall.  A change I didn't make on this version was to lengthen the bust darts, personally I find them a little short, its really not a big deal, I only realised they were bugging me after I'd been wearing the dress for a while but I think I'd lengthen them on a future version. 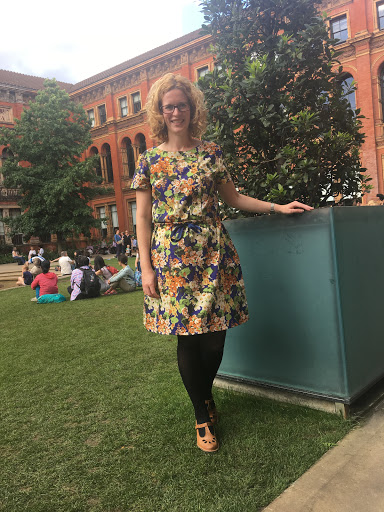 The off centre neck/overlap is such a nice feature and was really easy to achieve. The buttons I used are some which I'd recycled from a moth-eaten, vintage cardigan that I'd gotten rid of a while ago. I think they work really well with the fabric, and somehow can get lost and look a bit fancy at the same time. I used a navy ribbon for the waist fastening.  I should probably mention that the dress has pockets which I totally failed to get a picture of but they're definitely there.  To be honest, I know everyone raves about pockets in dresses but I really am not a massive fan.  On the rare occasion when I remember I have them and actually put something in them, the dress gets all lumpy and lopsided.  I might rebel next time and not include them! 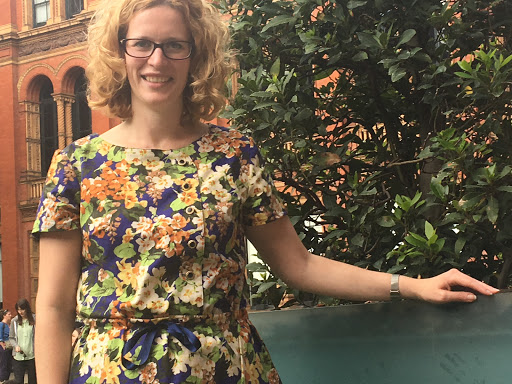 I really like this dress, I think it's super practical and fun too.  While I took these photos ages ago, I've been wearing this exact outfit all day (except with a cardigan over it as the UK hasn't decided to fix on a season at the moment!)  I definitely think I'll make another slightly more wintery version with longer sleeves.  I love Jen's versions in solid fabrics, which allow the off-centre front to stand out.  So, you never know, I may break the habit of a lifetime and opt for a plain fabric for next version!
at 10:45
Email ThisBlogThis!Share to TwitterShare to FacebookShare to Pinterest
Labels: Fabric godmother, handmade wardrobe, Jennifer lauren handmade, Pattern testing, Shirtdress