I have two knitted Christmas gifts to show off today.  One that I made for my Dad and one that was made for me.

First up is the scarf that I made for my Dad.  This gift was being knitted right up until the last minute (in fact I gave it to him with some of the ends not sewn in yet and had to finish them on our drive into town).  Here it is being modeled really well by my Dad at the lovely Trinity College, Dublin. 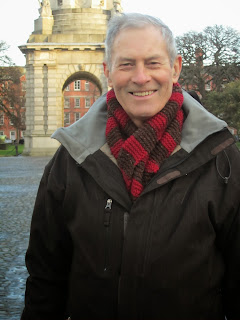 The red wool was a lovely merino wool that was a dream to knit with and was so lovely and soft that I wanted to make myself a nest out of it.  The brown wool was really beautiful with cream and red flecks in it (which you can't see in the photos), that I got at a car boot sale but it was a total pain to knit with.  It kept tearing, which became a lot  more annoying as time went on and Christmas approached.  Just FYI, for any of you flying places and needing to finish gifts en route, knitting needles and scissors with blades of less than 6cm are allowed in carry-on luggage, I checked!  I turned up to the airport with a government print out saying this, prepared to argue my case if security tried to take it off me but no one said anything so it was a completely stress free trip and the scarf advanced well on my 1 and a 1/2 hour flight back to the Emerald Isle.

Next up is a gift that was made for me, a lovely red sleeveless jacket/jumper/waistcoat thing (not sure what it should be called but whatever its name, it's great). 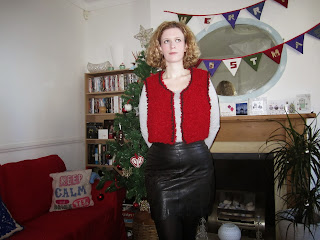 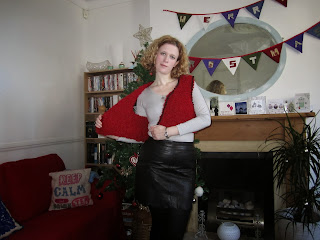 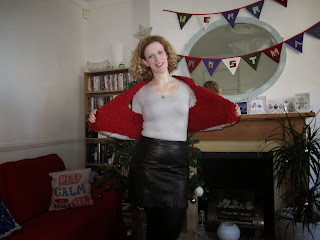 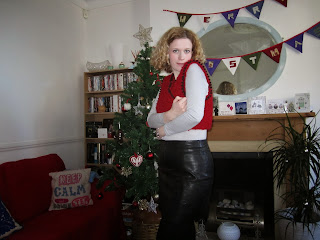 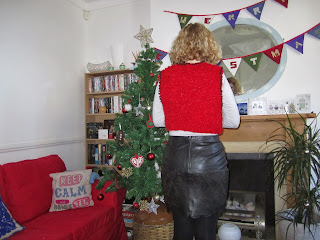 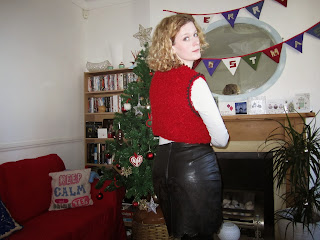 I have no idea what wool was used for this and I know the pattern was one of my french mother's own creation but apart from that I have no details. She then spent some time over Christmas teaching me some more knitting tips and how to make cables so that's my new knitting project, a cabled scarf for me!  Watch this space...
at 13:36
Email ThisBlogThis!Share to TwitterShare to FacebookShare to Pinterest