My 'made up initiative' pledge

Hi all.  I hope you're all having a very lovely, if wet bank holiday weekend (that is if you're in the UK).  I have been having a lovely time in Newcastle, doing a bit of site seeing in Northumbria, visiting friends and alternately expressing my love for the north and whinging about how cold I am.  I also had my Made Up Initiative dress to model which my lovely friend Ziz agreed to take photos of. 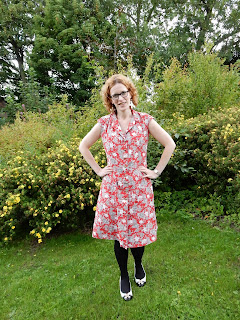 When Karen launched the Made up initiaitve, my first thought was wow, what a great idea!  Yes I, like everyone else, am guilty of spending money thoughtlessly/selfishly on my hobby and I loved the idea of an initiative that promoted not one but two of my great loves.  The details of the initiative are on Karen's blog but basically it's an initiative to support the National Literacy Trust.  Now while I (obviously) love sewing, reading was my first love and hobby and has enabled every other life decision and path.  I was lucky to grow up in a house where reading was valued and promoted and I've never had to worry about my reading ability holding me back, despite having dyslexia, but this is not the case for everyone which is what the National literacy trust tries to combat.  I was happy to donate to the cause anyway but Karen had added an extra level of awesomeness for us sewists-if we made a sewing pledge with our donation and completed by the 10th September, we would be entered into a prize draw of awesomeness.  My pledge was to make a shirt dress, I had the perfect fabric and the desire for a shirt dress had been strong for a while.

I have had the Edith dress/blouse pattern for ages, in fact it was the first Indie pattern I ever made and while that blouse version still gets worn as I love the fabric, there were a lot of alterations I wanted to make for the next version.  I needed to do a SBA which is frustrating as the pattern is sold as separate B and C cup patterns. I bought a C as I have a 4cm difference between my upper and full bust however with this pattern, I didn't need the extra room. I have never had to do a SBA before so I guess at least it's a new technique added to my skill set. I did however need to do a broad back adjustment which is now becoming a fairly regular occurrence in my dressmaking.

The fabric was this really vibrant, crisp cotton that I had bought on one of my Paris trips, it's been in my stash for a while.  I've noticed a few people mentioning recently about how the coupons from Marche St. Pierre tend to be quite narrow fabric, which I had never noticed/had a problem with before but certainly this fabric was very narrow and I had to cut 2 separate back pieces and stitch them together rather than cutting on the fold. 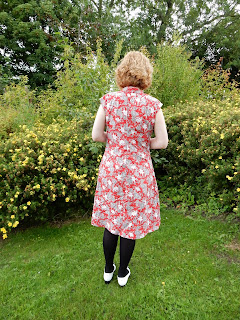 I really want this pattern to work for me as I love the style of the dress and there are so many lovely versions out there, Heather in particular has knocked up loads of beauties.  However, I still have a number of number of issues with the pattern and it's fit on me.  The Maria Denmark patterns do not have seam allowances included, I read somewhere that this makes them easier to adjust(?) but I find it really, really frustrating.  Also I find that the method of finishing the arm holes a bit shoddy but I had forgotten that irritation until it was too late to change it and use bias binding or something.  Note to self, read own notes on patterns before starting! I hadn't made the dress version before and was surprised to discover that I needed to remove a big chunk out of the back, particularly the lower back. Having cut two separate back pieces, turned out to be a happy accident as I was able to remove the excess from the back rather than trying to take it from the sides. Actually I think I still need to remove some excess all over, I don't know if I cut out a bigger size than last time but the whole dress feels very big.

The eight buttons down the front are these lovely vintage ones I had in my stash, however, having worn the dress for a bit I feel like the buttons need to extend further down the front.  However I only have eight of these buttons so I think I may cut them off and replace them with some others. 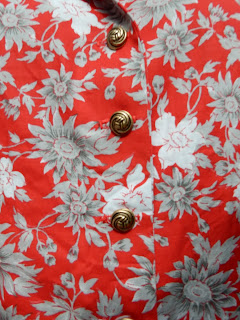 I wore this dress to go out with Ziz for the best brunch ever (where the extra room in the dress was very useful) and for a walk in the park before the rain set in again and I made her take lots of pictures of me. 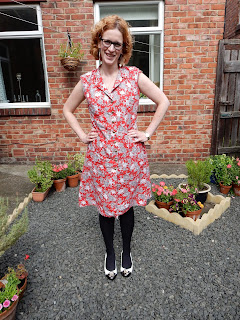 By the end of it I was laughing really hard and looked like this: 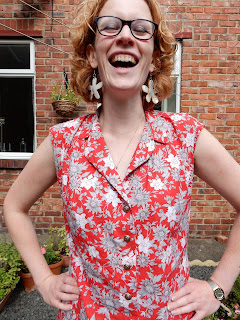 and Ziz looked like this!  She was full of yummy food and wanted to lie on a sofa rather than be a photographer!  Whereas my food coma didn't kick in until much later and I wanted to prance around in my new dress! 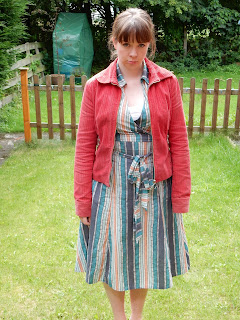 Hope you're all getting on well with your made up pledges, for anyone who hasn't yet donated, you can do so here.
at 15:15
Email ThisBlogThis!Share to TwitterShare to FacebookShare to Pinterest